Dictionary.com has selected ‘misinformation’ as the WORD OF THE YEAR!! It says : “The rampant spread of misinformation poses new challenges for navigating our lives”.

The reliability of any information, data, photos, images or video clippings are all suspect.  Fake news has become the order of the day!

The serious part is that we end up taking some important decisions based on the torrent of such misinformation.

The dangers are many: 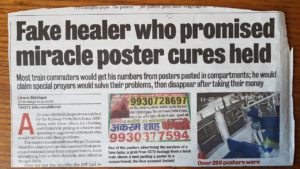 Some incorrect information may be spread intentionally.. for self interest, while some others may be what the person genuinely believes in and wants to share for the benefit of others.  The former are defined as “Disinformation”   by Dictionary.com and the latter are called “Misinformation”!!  If you trust a source , even the Disinformation received by you and then shared becomes Misinformation!!

Over periods, Science keeps correcting itself with newer discoveries. This is fine. In some cases, however, the guillible millions are taken to ride..like in case of the way the dangers of Cholesterol were misrepresented for years, allegedly  to push the sales of Statins !

The bombardment of information affects our Belief system. I am reminded of a workshop on “Rational Emotive Therapy” during mid 1980s at Cibatul by Dr Phadke. His words still ring in my mind. To illustrate the effect of belief system on our emotions and actions ,he cited example of how different groups of people responded to the murder of Indira Gandhi. A large part of the population felt extremely sad..a few even committed suicide. For them , this was a great/ a strong leader who was required to keep the country strong and united. Then there was another section of the society who believed that she was the cause of the problems their community faced. They were dancing and distributing sweets!! The Belief system of the different groups was shaped by the set of information that they kept receiving over  periods of time.

The intensity of the Bombardment is perhaps 1000 times greater now, with the reach of a variety of social media channels available to almost the entire country..and the world at large!

How do we protect ourselves from this onslaught? How do we make sure that we base our decisions on the right kind of information?

Well, there are no easy answers.

The only option that strikes me is the need to verify an info. from different sources. It is like a reference check that is done for a job candidate or while choosing a bride/groom!