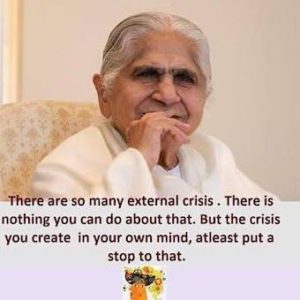 I want to share information about a unique person who has inspired me a lot for the past 30 years viz.Dadi Janaki.. She passed away last Friday (27 th March ,2020) at her age of 104 .

Here are some bullet points about her:

“ She has shown that there is another way of leading a large  organisation, not by structures and processes , nor by the power of position ,but by the power of being what she is”

“Although so often on the move, she has inner stillness. It is the fruit of spending long hours in the presence of the Supreme Soul”

“ Dadi Janki has now been my guide for more than 30 years. Her teachings, along with other teachers of the BKs gave me much joy ,improving my ability to negotiate the daily vicissitudes of newspaper work with equanimity and strength”

…Neville Hodgkinson, prior Medical and Science correspondent of The Sunday Times and Daily Mail.

May the Divine Soul continue to inspire millions and millions around the world!

One thought on “My Inspiration”