Time: Is it Linear or Cyclical?

For over a century , the thinking of the world has been very strongly influenced by Darvin’s Theory of Evolution. The underlying theme is that the time is linear and over millions of years, the nature of life on the planet earth is very gradually changing in to supposedly better /stronger and fitter entities which have the wherewithal to survive adverse conditions. There is so much acceptance of this idea that people generally think that Evolution is not merely a theory but a proved fact!!.

Indeed, most people are not aware that there are well-qualified and competent scientists who hold views against the  Theory and who give scientific reasoning in support of their views.

Suffice it to say that there is a legitimate space for an alternate view of the concept of Time . The reason to bring this up at this stage is to show that a different world view is possible which can explain what is happening to this planet today.

The alternate hypothesis  is that Time is not linear , but cyclic….just as all other aspects of nature :

We are able to perceive the above phenomenon as cycles as the cycle times in these cases are short and as such they happen several times during our life. It is not easy for us to understand Time also as cyclic , as the time to complete one cycle is way beyond our life span. In other words, we do not live long enough to see Time in its cyclic mode!

The Time ,and therefore the world that we live in , moves in cycles.

The main parameter which determines the course of this cycle is the prevalent Value System during the different parts of the cycle..

Everything begins in a pure/perfect way and deteriorates over a period of time .

The world also begins in a pure /perfect form .

Let us run through various phases of this cycle: (also signifying the importance of Swastika) 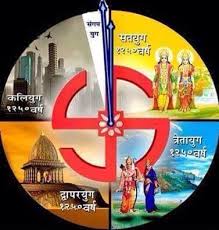 Ultimate stage of the cycle:

What we are seeing today is the  consequence of the cumulative effect of all the value less behaviours over hundreds of years.

At this rate, we will see disaster after disaster, of one kind or another in the next 20-30 years.

An encouraging development amongst all this gloom is that a section of people, however small in numbers, have started looking at the futility of this unending race in the pursuit of  materialistic pleasures. They have started realising the need for ‘looking inwards’ ..and going back to the core/innate values. Time is coming when the Values will again be valued.

While the major part of the world is moving toward self annihilation, the above set of people will reach a critical mass and will enable complete transformation in to a value based society.

We would have reached the start of a new cycle …and reappearance of the Golden Age/Sat Yug..and that of the core values of Love/Peace/Harmony etc.

Let us be a part of this small group and be responsible in bringing that New Age , for the benefit of every one.

** based on the understanding i have got from Brahmakumaris.

4 thoughts on “history linear or cyclic”